Circular No. 40/14/2018-GST dt. 06.04.2018 issued: Exporters to file LUT in FORM GST RFD-11 on the portal only. LUT will be deemed to be accepted as soon as ARN is generated. No document needs to be physically submitted to the jurisdictional office.

The Union finance ministry on Friday notified that a uniform rate of 5 percent will be charged towards Goods and Services Tax (GST) in all railway catering services in trains or stations.

As per the Central Board of Excise and Customs (CBEC), the decision has been taken with a view to remove any doubt or uncertainty in the matter and bring uniformity in the rate of GST applicable to supply of food and drinks made available in trains, platforms or stations

The supply of food and drinks by

In March, IRCTC had introduced Point of Sale (POS) hand-held machines in trains, after many passengers filed complaints of train vendors overcharging passengers.

“Over 1.71 lakh inter-state e-way bill was generated on the day of nationwide launch on Sunday, with experts saying that the real test of the portal will be on Today”

” Businesses and transporters must produce before a GST inspector e-way bill for moving goods worth over Rs 50,000 from one state to another“.

Official at the Goods and Services Tax Network (GSTN), the company which has developed the IT backbone for GST regime, said that the e-way bill platform been working smoothly.

The implementation of the nationwide e-way bill mechanism under GST regime is being done by GSTN in association with the National Informatics Centre (NIC) and is being run on portal — https://ewaybillgst.gov.in.

“Karnataka is the only state which has implemented the e-way bill system for moving goods within the state”.

The state has been using the e-way bill platform since September last year for Intra-state movement of goods.

Experts, however, said that the real test of load capacity of the portal will be tested on Monday as the number of e-way bills generated on Sunday is much less compared to weekdays.

“No major hiccups on the first day of the relaunch of the inter-state e-way bill system. The e-way bill portal seems to be much stable this time.
The e-way bill provision of the Goods and Services Tax (GST) was first introduced on February

Since then, the platform has been made more robust so that it can handle load of as many as 75 Lakh inter-state e-way bills daily without any glitch.

As many 1.05 crore businesses have registered under the GST and about 70 lakh filing monthly returns.
The GST Council, last month, had decided on a staggered rollout of the e-way bill starting with inter-state from April 1 and Intra-state from April 15 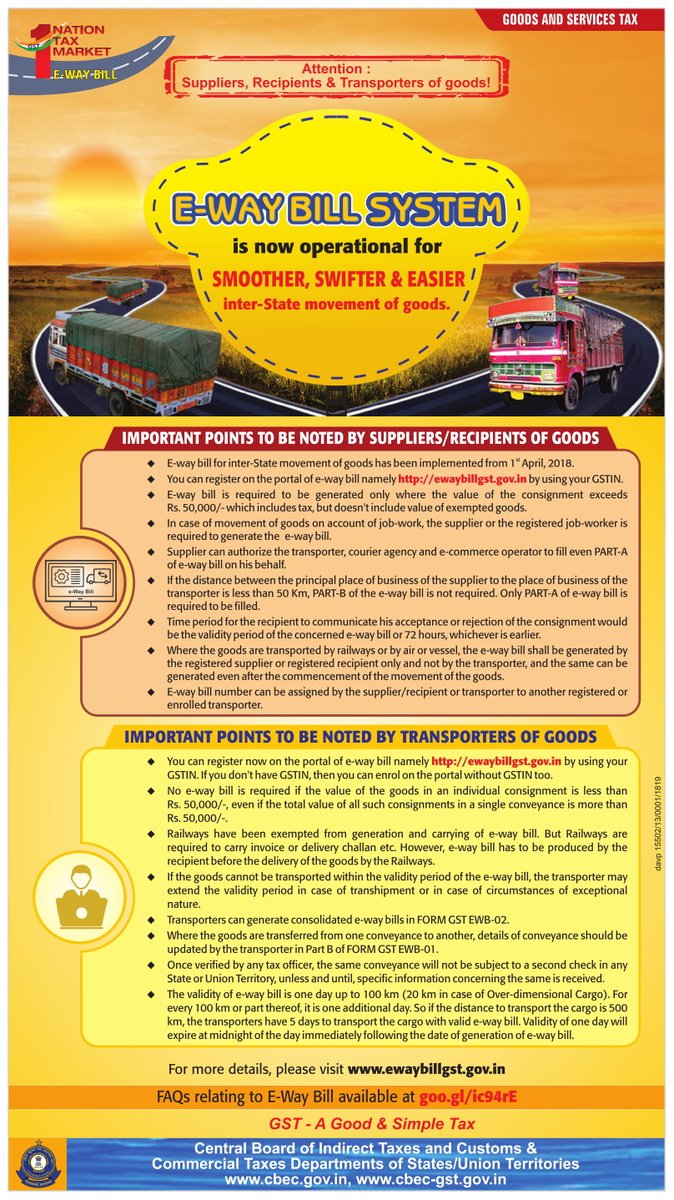